The geopoint offers a spectacular view into the mining area of light white quartz sand. In the parking lot with information boards there is also a 45 t heavy giant find, which came to light during the mining activity.
About 45–70 million years ago, Europe had a subtropical climate. In the area of Uhry at that time there was a large delta of a river, which brought very pure sands and fine gravel from the mainland and deposited here.

These white sands, which are almost 100 percent quartz, are a sought-after raw material for the industry and are also used for the production of computer chips. Many millions of years later – in the Saale cold season about 330,000 to 127,000 years ago – a layer of sand, gravel and large boulders several metres thick was deposited over the fine sands, which were transported here by the glaciers from Scandinavia.

About 300 of these stones lie in the Findlingsgarten Königslutter in a modelled ice age landscape. The largest boulder of approx. 45 t weight found so far in this sand pit is located at the information point on the road from Uhry to Rhode. From here you also have a good overview of the pit with the white sands and temporary small waters.

The extraction of raw materials always means an intervention in nature, but often also creates new habitat: In the sand-cliffs, shore-swallows have laid out their brood-tubes, and icelandic birds, toads and heat-loving insects found a new home in the pit. 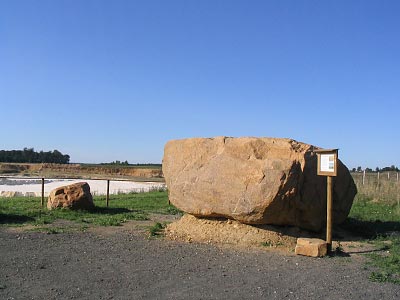