In 2002, the Geopark Harz . Brunswick Land . Ostfalen was founded in Bornum, the town of Königslutter am Elm. Preparations for this began in 1997 in the Brunswick land area with the foundation of the open-air and adventure museum Ostfalen e.V. (FEMO). Together with the regional association Harz e.V., FEMO founded one of the largest geoparks in the world. In 2003 the Geopark became a member of the National Geopark Network, initially with the Brunswick Land sub-area. In 2004/2005, the European Geopark Network (EGN) and the Global Geopark Network (GGN) were added to the European Geopark Network (EGN) with the support of UNESCO. Since then, the Geopark has been successfully revalidated three times, most recently in the summer of 2013. The infrastructure, management, programme, budget and protection concept were examined.

Unlike national parks, biosphere reserves (MAB) and nature parks, geoparks are not a separate protection category. Although nature conservation, especially geotope protection, also plays an important role, in geoparks the focus is on humans in their interaction with the landscape and the natural resources. A geopark is a facility for people. This means that a 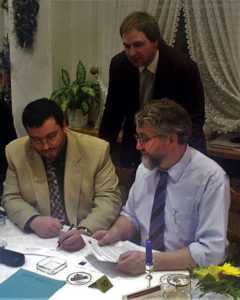 deserted unique natural landscape could never become a geopark. Industrial and urban areas – such as Braunschweig, Wolfsburg and Salzgitter – can be part of a geopark.

The task of a geopark is also to promote and maintain knowledge about geological resources and to inform about the sustainable use of raw materials. People’s history has always depended on the landscape and its resources. This is why archaeological, historical and cultural themes naturally belong to every geopark: the first arable crops have settled in our region because of the loess soils, the Romanesque buildings would not have been bought in their splendour without the Muschelkalk and Rogenstein – certainly not without copper, lead, zinc and silver in the resin. Without the iron ore in Salzgitter and Peine, no steel industry would have developed there and subsequently not Volkswagen. Relations extend to the present day: without the decommissioned mines, there would not be the some highly problematic nuclear waste storage facilities in The Brunswick Land.
Geo-knowledge is essential here! 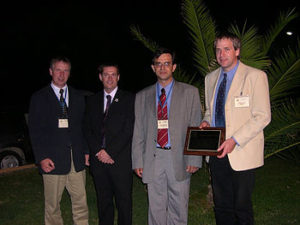 Geoparks inform about these connections sowohl in the leisure and tourism sector as well as in cooperation with educational institutions. Precisely because geotopics from If curricula have disappeared, several institutes at the universities of the region have been closed and the geological authorities are restricting the basic mapping work, geoparks have taken on an important social task. They act from the bottom up, that is, they are firmly anchored in the regions. This results in close cooperation with the municipalities, counties and cities, which currently also bear the bulk of the Geopark funding, while the federal states limit themselves to project funding (EU funding programmes) and federal funds have not been used at all.

A total of 120 geoparks are currently recognised in the Global Geopark Network (GGN) (2016), 69 of them from Europe, 6 of them from Germany. In many regions of Asia and South America, geoparks are state-sponsored as instruments of regional development. The first initiatives are also growing in Africa. In November 2015, the GGN was recognized as an official UNESCO initiative and thus placed in its importance alongside the World Heritage and Biosphere Reserves (MAB). Thus, the Brunswick Land is in one fell swoop almost in its entirety an area awarded by UNESCO – besides only 5 others of its kind in Germany.

From the beginning, the Geopark Harz . Brunswick Land . East Falen can win the economic ministers of the affected federal states as patrons. After the support of Mrs Knolle (SPD), Ministers Hirche (FDP) and Bode (FDP) were each ready to take on this function. Minister Lies (SPD) has also promised to do so.