Founded in 2002, the Geopark is about 9,650 km2 in size and is part of the three federal states of Lower Saxony, Saxony-Anhalt and Thuringia (Peine, Wolfsburg, Braunschweig, Salzgitter, Wolfenbüttel, Goslar, Osterode am Harz, Bördekreis, Harz, Südharz-Mansfeld, Nordhausen, along with individual municipalities and towns in the Northeim district and the Salzlandkreis).
The Geopark is financed by a mixed financing from predominantly municipal public funds, funds from the private sector (tourism, raw materials industry), sponsorship funds, income from guided tours and project-related funds.

The geopark is sponsored by the Geopark Harz . Braunschweiger Land . Ostfalen GbR with its two equal partners, the Geopark-Carrier Association Braunschweiger Land – Ostfalen e.V. (until 2016: Open-air and Adventure Museum Ostfalen e. V.) based in Königslutter and the regional association Harz e.V. based in Quedlinburg.
Both sponsoring associations represent the Geopark together – combined by a GbR contract – but manage separate households. In a joint Geopark steering group, they coordinate the geopark development for the affected counties and district-free cities (common appearance, quality control). In addition, internal network partners have the opportunity to submit their own projects in coordination with the Steering Group. 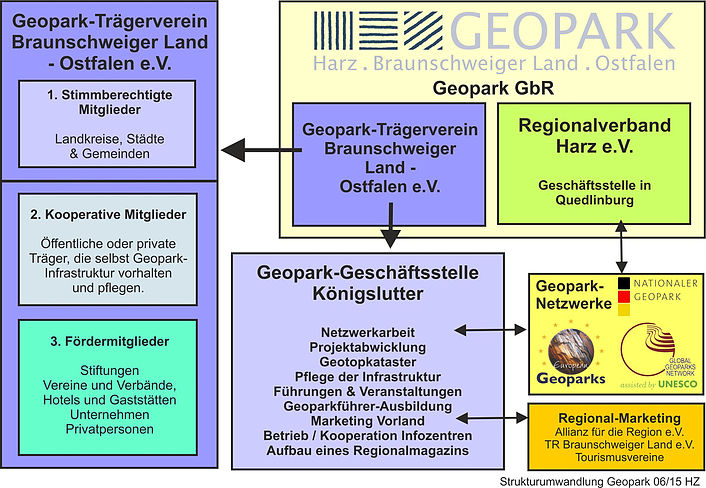